Where to find Jobs for Accountants

If you’re in the market for an accountancy role, you might be wondering where the best place to look is. The internet is saturated with promises of the perfect role for you, right where you live (if not closer). But where are Accountants most likely to find their ideal position? Here, in no particular order, we take a look at 10 of the best options for finding a new accountancy job.

Reed is one of the most well-established and respected job boards out there. It’s often the first place people go when they’re looking for a new role. But how does it measure up when it comes to accountancy? Pretty well, actually. There are several thousand jobs available in accounting. The vast majority of these are permanent and full time, regardless of the level of seniority. Qualified Accountant and Assistant Accountant roles are plentiful with Part-Qualified and Bookkeeper jobs slightly more thin on the ground. Unsurprisingly, London has more roles than any other city – around 25% of all vacancies on average. Manchester is the second most popular location, although there’s still a big drop in the number of vacancies in comparison to the capital. Birmingham isn’t far behind Manchester when it comes to hiring Accountants but those looking in northern cities such as Newcastle will find accountancy roles more difficult to come by.

Indeed is by far one of the biggest job boards about. If you carry out a Google search for a new role then the chances are Indeed will be one of the first suggestions. There are thousands of accountancy vacancies available in cities around the UK and most of these are permanent and full time. Accountancy practice is the most popular field for Accountant positions, and London the most common location – almost a third of all roles are based there. Again, Manchester is in second place, with around a third of the number of vacancies as London. Qualified and Part-Qualified roles are the most numerous, followed by Assistant Accountant and Bookkeeper positions.

While a much smaller source of jobs than either Reed or Indeed, Gumtree is still a popular choice for those looking for a new role. It carries around a third of the number of accountancy vacancies as Reed with the majority being full-time permanent positions. There is one big difference when it comes to Gumtree, however – most of the accountancy jobs available have been listed directly by the firm looking to hire rather than by agencies. The opposite is usually true of recruitment sites such as Indeed.

As the name suggests, Accountancy Age is a site specialising in accountancy. Unlike the other options we’ve looked at so far, you will only find accountancy roles here. While there are significantly fewer positions available than on the bigger boards, they tend to be more specialised. Almost all require candidates to be Fully Qualified or QBE and the majority are in accountancy practice. While the South East has the biggest slice of the pie in terms of location, it’s closely followed by the East and the East Midlands, a trend not seen on sites like Reed and Indeed.

Ten Percent Financial Recruitment specialise in qualified accountant roles across the UK and offshore, both permanent and contract. They also maintain a Freelance Accountant Directory and an Accountancy Fees Directory, both of which are free to use. These enable accountants looking for work on an hourly rate to advertise to accountancy practices and potential clients. The site ranks well with Google and new roles and vacancies are posted daily.

Hays have a specific section focusing on accountancy and finance with more than a couple of thousand vacancies. About 80% of these are permanent and almost 90% full time. Around a quarter of these are in accountancy practice with high numbers of roles also available in advertising, media and PR, the public sector, manufacturing and production, retail, and IT. Around a quarter are in London with the next biggest city for accountancy being Manchester. However, Manchester accounts for around just 5% of overall roles, and other big cities such as Birmingham and Glasgow only have a handful of accounting positions available.

The Institute of Chartered Accountants has a section for vacancies on its website. As with Accountancy Age, this is a much more specialised place to look for a role, which is probably why there are far fewer roles than on the larger job boards. There are usually a few hundred positions available with around 40% of them being based in accountancy practice. Almost a quarter are Accountant roles with Audit and Tax candidates also being in demand. The overwhelming majority of roles are in London. The rest of the positions are scattered about England with a handful in Wales.

Google’s recruitment offering works right from the Google main page – you search for the type of role you’re interested in and it’ll show you the most suitable results. The top three will appear directly on the search engine results page, but there’s an option beneath them to click through to more. Clicking on a specific role will take you to a pane showing more information. There are also various options on offer for applying for the role, for example, buttons linking to different job boards or directly to the hiring firm’s website. Google collects vacancies from all over the internet, including recruitment boards and employer websites, meaning that this is one of the most comprehensive ways to search for accountancy roles available.

Glassdoor has several thousand accountancy and finance vacancies on its database. This includes more than 1000 Accountant roles with around half of those based in London. Glassdoor gives you the option to search by either job title, location, or company – and this is where the site’s strength comes in. Glassdoor gives candidates in-depth information relating to employers that isn’t available on more traditional job boards. You can find an overview of each firm as well as a rating out of five as an employer. It also provides reviews by current and former employees, allowing you the chance to decide whether the company is somewhere you would like to work.

If there is somewhere specific you want to work – for example, one of the Big 4 firms, or a certain type of accountancy practice – then checking out the website for that company periodically is another way to look for your ideal job. You could even send a copy of your CV to them on a speculative basis. Some firms might not have got round to listing a vacancy yet, while others choose to hire when they find the ideal candidate rather than to fill a specific position. Even if they’re not looking for anyone at that precise moment, they might keep your details on record and get back in touch when they are. This is a particularly good approach if you live in an area that isn’t catered for by the bigger job boards. It’s often as difficult for smaller regional firms to find good local candidates as it is for those candidates to find local roles, so don’t be afraid to make the first move!

While there is no one-size-fits-all approach to job-hunting, there are lots of options out there when you’re looking for a new role. The best tack to take is to explore the various websites on offer and see which of those best suit your needs. And keep checking back. Roles are constantly being listed and filled, so just because there isn’t anything suitable one day doesn’t mean there won’t be the next – or even later the same day! 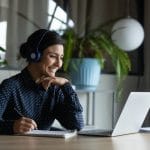 Previous Post Accountants Working From Home – Is the Traditional Office a Thing of the Past?
Next Post New Accountants looking for work