in Articles, Candidates, Careers on April 14, 2020 by Emma Ireland

Which Accountancy Firms Are Known As The Big 4 And Why?

Whether you work in the accountancy field or not, the chances are you’ve heard mention of the Big 4 at some point. But what exactly does it mean and which firms are being referred to?

The Big 4 are: Deloitte, PricewaterhouseCoopers, Ernst & Young, and KPMG. All of these accounting, audit and consultancy giants are household names and operate from bases around the world but they’re not technically firms as such. Instead, they are a network of entities that are each owned independently but share branding and quality standards.

Deloitte – or Deloitte Touche Tohmatsu Limited, to give it its full title – is currently at the top of the pile when it comes to the highest revenue. However, PwC is never far behind and the top spot often changes occupier year by year. With more than 310,000 people working under the Deloitte umbrella, the firm is the largest of the Big 4.

PwC, as PricewaterhouseCoopers is known, is somewhat smaller with just over 250,000 employees around the world. However, size is clearly not all that matters since PwC so often beats out the other Big 4 firms in revenue terms. It ranks as the second biggest professional services network after Deloitte.

Ernst & Young – often referred to by the acronym EY – is present in 150 countries and currently employs more than 270,000 people. EY is the third largest of the Big 4 when it comes to revenue and, along with Deloitte and PwC, has its headquarters based in London.

KPMG is the smallest of the Big 4 with around two-thirds of the revenue of Deloitte. That doesn’t make it a small fish, however. With almost 220,000 people spread across 147 countries, KPMG is a prestigious organisation that has earnt its place as one of the world’s biggest professional services networks.

Although known as the Big 4, these top firms originally started out life as the Big 8. They were eventually whittled down to Deloitte, PwC, EY, and KPMG through a series of mergers and the collapse of Arthur Andersen after the Enron scandal in 2001. Together they dominate the accountancy market and collectively generate more than $150 billion per year.

It’s no wonder, then, that so many accounting professionals and graduates want to work for them – and that experience at one of the Big 4 can often open some big doors with other employers.

For an up to date review of salary levels paid by the Big 4, please click here. 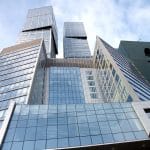